The code base for the Arduino Enigma Machine Simulator has been quite stable lately, it has been tested extensively so there are no glaring issues. There was however, a small intermittent visual corruption bug in the plugboard view that was difficult to track down. Not having a specific sequence of steps to reproduce and not being able to make it happen on demand, it could not be fixed.

Lately, I have been active in the Engima World Code Group Forum http://enigmaworldcodegroup.freeforums.net/ and using the simulator a lot through the serial port with the Arduino Serial Monitor tool since it is the easier way to encode long texts.

This is the main screen, touching the area at the bottom of the screen below the PYXCV key row enters the plugboard view. 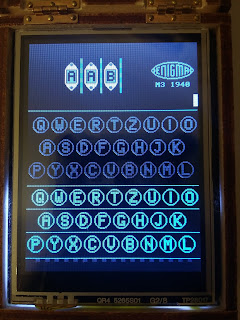 This is the corrupted plugboard view, notice the faint E between the K and the L. It turns out it is in exactly the same position as the E in the lamp field in the main view. Touching the T shaped keys at the top of the screen returns to the main view. 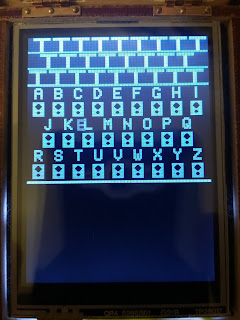 If the plugboard view is entered again the visual corruption disappears. 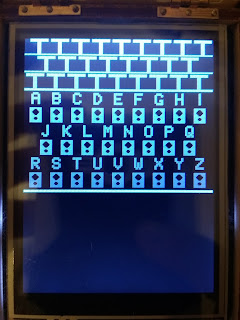 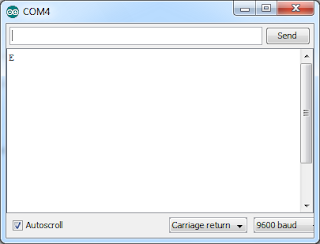 Having a reliable sequence of steps that would reproduce the bug, fixing it was easy, clear out the encoded key variable if the letter is received and encoded through the serial port routine. Version 1.5 has been released to fix this.

This bug was hard to track down because the plugboard had to be opened right after encoding a character through the serial port. If the Enigma logo was touched to open the machine instead and then the plugboard view was opened, it would display correctly.

New customers will get this updated version on their units. Existing customers can download the latest version at the usual download location provided in their welcome e-mail.