Jumped on eBay, searched for "ec11 encoder" and quickly decided on a 20 step rotary encoder. A few days later it showed up in the mail.

From previous work on rotary encoders, I remembered they have a common pin, and two pins that produce a square wave that's out of phase. If the pins are read together they are supposed to return a sequence like 11->10->00->01. This is called Grey Code, where two successive states only differ by 1 bit.

One side of the switch has 3 pins the other side 2. The two pins on one side get shorted together when the shaft is pushed. The three pins on the other side are the rotary encoder pins. The data sheet says that the center one is the common and the other two produce the out of phase square waves.

Before wiring anything, I decided to test continuity with a meter. The two pins measure open at rest and continuity when the encoder shaft is pushed in. That was easy enough. The rotary encoder pins were a different story, nothing measured continuity, rotating it did not help, measuring resistance, the meter briefly jumped from open, but it never showed continuity. Thinking that this encoder must be bad, I measured another, but got the same result.

Ok, time to wire them up to an Arduino and see what the pins are doing. The datasheet says to connect the outside pins to VCC using a 10k resistor and connect the middle pin to ground.

Jumpers were soldered to the encoder leads. The center pin, in green was connected to ground. The left and right pins were connected directly to D12 and D11. The Atmel/Microchip ATmega 328p used in the Arduino Nano has internal pull-up resistors that are activated by setting a pin as input and then writing high to it.Reading the pin will then return 1 if not connected to anything, or 0 if connected to ground. 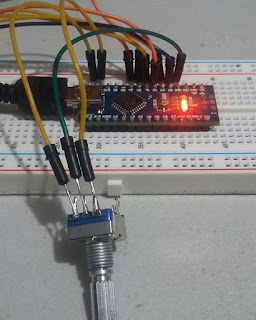 The first step is to see what the pins are doing as seen by the Arduino. The code below uses the following fast pin library
https://github.com/mikaelpatel/Arduino-GPIO


This is the output from this code 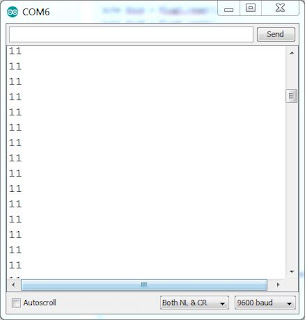 This encoder is always outputting 11, turn the shaft and some digits change, but it always returns to 11.

Scrolling up, we see that the pins change when turned. 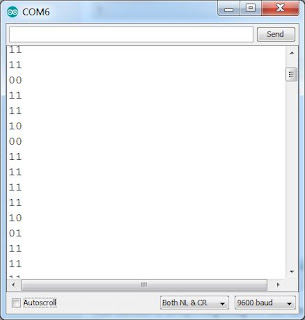 Let's add some code to filter out the at-rest 11 state and see whats going on more clearly.

When the input pins are not showing 11, this function prints their values. When the pins return to 11, it prints "done" once and goes back to listening for a change.


Here is the output from calling this function in loop()

The encoder is being turned clockwise (CW) 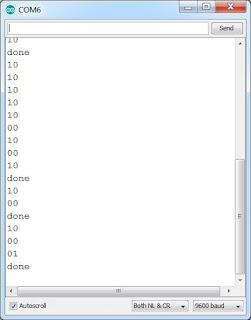 And here we see the encoder being turned counter-clockwise (CCW) 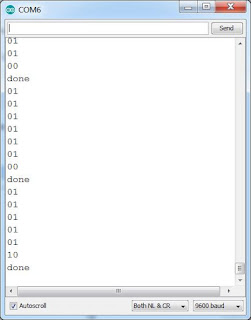 Now, a pattern begins to emerge.

This encoder is always outputting 11, when turned clockwise, it starts emitting a lot of 10, followed by a single 00, before returning to 11

Turning the shaft rapidly shortens the initial repeat pulses, but most of the time it keeps the 00, followed by 11. 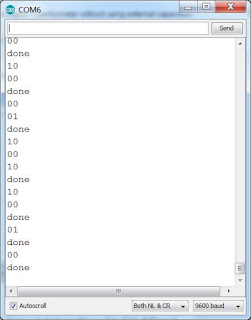 To keep this short, here is the final debounced routine.

It reads the encoder pins either one at a time using the read() function or both at the same time accessing PINB.


This function represents several improvements over its initial implementation. The first improvement was to add logic to stay in state 0 if 00 was the first value read after 11. This worked fine when turning the shaft slowly. Turning the shaft quickly resulted in the routine reporting the opposite direction sometimes.

These missed events were further filtered out with the second improvement, looking for a 00 value in state 1. A good turning event is as follows 11->01->00->11

The routine as shown above is very stable and correctly reports slow or fast turns in either direction without using any external filtering components such as resistors or capacitors or combinations thereof.

The main loop is as follows:


Here is an example of the encoder being rotated very fast in a clockwise direction. There is a single mis-read event at the 10-11 mark, but it will be masked by successive events, the user should not notice as the end value (18) is significantly higher than the initial value of 1. Turning the knob slowly produces corrects results all the time. Reading noisy rotary encoders is tricky, but the polling code shown above does a fairly good job of counting valid events while disregarding noise that could result in the encoder being read as being turned in the opposite direction. 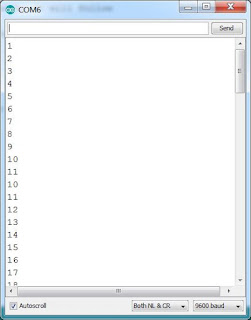 Before introducing complexity in your designs, in the form of external components or complicated code, first try to understand the component you are working with. Observe its raw output, then write code to handle most of the cases. Finally, refine the code by adding more cases until it works with an acceptable percentage of reliability.

The above code implements a state machine to turn the following inputs 11->01->noise->00->noise->11 into a single valid turning event in a simple polling routine without using an interrupt service routine (ISR). The code can be expanded to keep track of multiple rotary encoders by changing the way the state variable is stored, but that is left as an exercise to the reader ;)